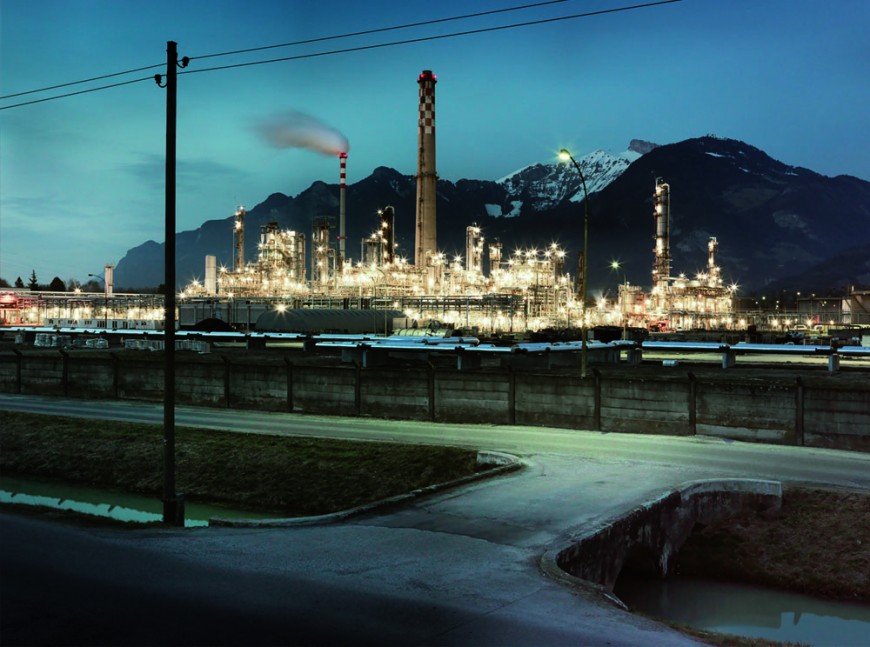 The exhibition aims to introduce the viewer in the various series made in the last ten years by photographers Andreana Scanderbeg Sauer & Alexander, skilled narrators of control technologies. In their achievements there is confidence in technological innovation, the beauty of contemporary architecture; showing a better expression of urban life changing. Each snapshot shows that immortalizing architecture isn’t less complex than capturing the right expression of a face in a portrait.

The exhibition narrates  people and urban worlds through the built landscape, considering photography as an ambitious and perhaps more suited tool to document it, rather than the symbiosis between the two disciplines, 'Iconic Geography' describes  how a photographical path can help orient the eye: from envisaged life around impassable sites, to the analysis of industrial impact on the territory and how to develop the work in industrial contexts. The photographers have explored many different geographical places on the edge of civilization where mankind often capitulates and surrenders. In these aesthetically perfect images they have evoked the glorious past of iconic aircrafts that are abandoned in the desert, whose carcasses tells us about journeys, enhancing the lines and shapes.

In the new series, 'Chavalon', they have captured the morbid beauty of progress and identified an appearance of loss of control.Goods, trains, ships, production processes and industrial landscapes fill the outskirts of the world; describing to us about  progress and movements, journeys and worlds made of work in which people in the companies apply technologies and innovation.

A world, not at all known, appears in our eyes as if timing and determination tell us about progresses and defeats; where we are going, and where probably we will arrive with our discoveries and in the economy evolution.

If until a few decades ago, photographs that told us about the world of work were a prerogative of  company archives - today they have become the research and have a new form of collectivism.

In the evaluated choices for their first  Italian exhibition, it was thought of as a story in which were retraced the routes of the frenetic world of business and goods, and how the stages of the metropolis are interspersed with suburban places where the story delves into the internal of: silos, pipes, special industrial machineries and companies in which the noise and the glimmer of gas, the fire and the steam dialogue with the routine.

As in an actual remake of 'Red Noise' by Michelangelo Antonioni we are distracted from that articulated and industrial landscape in which you lose, or find yourself.