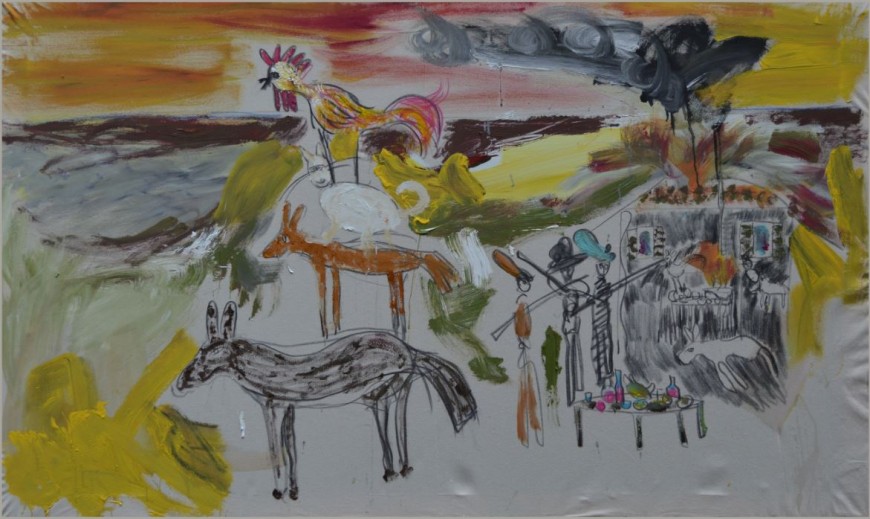 The colours of fairy tales: architectures of our dreams

At the origin of “once upon a time” there is the identity of man; the fabula which by etymology means story is the evolution of the myth, historical root of our intellectual maturation. Giancarlo Benedetti Corcos wanted to deal with this articulated theme to talk about the fairy tale, the dream and their mixture. It is no coincidence, in fact, that children are introduced to sleep with an oral narration in which the sounds of words become a lullaby, composed by concepts and  storytelling suggestions of the fairy tale that stimulates the imagination of the child, who dozes off with in mind images to be elaborated .

For the adult who reads before going to sleep, the process varies slightly, the voice of the parent or grandfather misses, but the eyes close immersed in the events of the story presented by the book. The coloured line drawing, a specific aspect of Giancarlino's works, becomes the means to express suggestions, born from the memory of the tales that made up his childhood background and his curiosity today.

The conceptual process that led the artist to compose this new cycle of pictorial works passes mentally from the long stories of Giambattista Basile, Charles Perrault, the Grimm brothers, to the shorter Russian traditional flok tales and to the ancient morals of Aesop  arriving to Haiku aphorisms, capable in a few words of enclosing deep meanings. The works exposed become in this occasion, pages of a book that contains pregnant episodes of some fables (The Love for Three Oranges, Little Red Riding Hood, The "Town Musicians of Bremen", The golden fish, Ivan the fool, The golden bird), identified by the author as particularly significant. Moving between the paintings, the viewer builds his own narrative path by observing the illustrations of the relevant passages of the novellas in which the values ​​of our culture are identified. The gesture becomes a pictorial sign full of fantasy and energy and the typical figures drawn by the artist are always colourful and slender, but well recognizable. The new invented characters seem to float within the perimeter of the canvas that defines time and space of the setting. Giancarlino does not deny himself and once again with the spontaneity of his strokes proves that he has nothing to prove; frank, vital, volcanic, he communicates his imagination without filters with the strength of those who have been able to rework in a completely personal way those profound teachings of stories that accompany us throughout our lives. The author seems to suggest that if in the beginning there was the logos and in the middle of life the dark forest there is nothing left but to wait inexorably for the grand finale of they lived happily ever after.

Giancarlino Benedetti Corcos (known as Giancarlino) was born inRome, in 1954, where he lives and works. After graduating from the National Institute for Design, he enrolled in the Faculty of Architecture of La Sapienza where he attended Bruno Zevi's lessons. From time to time, an eclectic author chooses the support where to paint: ceramic, canvas, wood, paper, recycled materials, "sheets" which he hangs on the external wall of his studio interacting with passers-by. He accompanies his exhibitions with performances based on theatrical texts (“little comedies” written with Laura Rosso) or imaginary figures. He exhibited in Italy and abroad; among the numerous institutional venues and galleries we mention: the Palazzo delle Esposizioni, the Giulia Gallery, the André Gallery, the Incontro Art Gallery in Rome, the Tornabuoni Gallery in Pietrasanta (LU), the Castello di Rivara - Contemporary Art Center by Franz Paludetto - Rivara (TO), the Usine de Rue Charlot in Paris and the Onishi Gallery in New York. He participated in the Venice Biennale in 2011 and at the Faculty of Architecture of Valle Giulia there is one of his ceramics entitled Rosso del Debbio, produced for the 40th anniversary of 1968. He created many of his works with Massimo Alessandrini (Easy Furniture) and Alberto Giuliani . Some wrote about his work: L. Rosso, A. Bonito Oliva, L. Cherubini, G. Marramao, L. Scialanga, M. Morellini E. Orsini, V. Sgarbi.

Noemi Pittaluga, born inGenoain 1985, graduated from the Sapienza University of Rome in the Specialized course in Knowledge and techniques of theatrical, cinematographic and digital language. After a Masters in museum and performance events curator of the IED, she is currently graduating from the Sapienza University of Rome in the master's course in art history. He published Introduction, in Mario Vidor, Roma Capitale, (Punto Marte edizioni, 2019), the essay An uncertain identity between life and death (Publishing and Entertainment, 2012) and the book Studio Azzurro. Theater (Contrasto, 2012); since 2010 she works as an independent art curator.